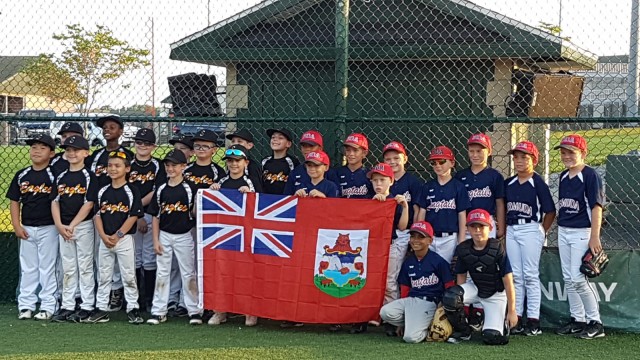 The Bermuda Longtails U9 Travel Team ventured to Aberdeen, Maryland over the weekend of June 1 to play in the Cal Ripken Summer Kick Off Tournament.

The forecast for the weekend threatened thunderstorms, but the weather held off Saturday morning and the Longtails were featured in Cal Sr's Yard - the marquee stadium at the Cal Ripken Aberdeen facility - against the Cherry Hill Nationals.  Zach McGuire started and struck out four over a strong four innings and was relieved by Jack Fischer who gave up one run and over the final two innings.  After giving up two runs in the top of the first inning, the Longtails came out strong by scoring four runs in the bottom of the first with Johnny Bart reaching on a walk and Luke Driscoll getting to first on a hit by pitch.  Zach McGuire hit a single to left field driving in Bart.  The rally continued with Connor Hupman drawing a walk, Driscoll's heads up running and scoring on a wild pitch, followed by a Jojuan Salas-Rosario double to left field scoring McGuire and Hupman.

The Longtails added another run in the 2nd when Johnny Bart drew another walk, followed by a double to center by Luke Driscoll.  Zach McGuire picked up an RBI with a grounder to short scoring Bart.

Unfortunately that was all the scoring from the Longtails as the Nationals shut them down for the next four innings.  The Nationals added three runs in the third to tie the score at 5-5 and then added one run in each of the next three innings, including a home run to deep center by Fekete, to eventually capture the win 8-5.

The Longtails played solid defense and looked strong against a very well respected team in their first official international tournament game.  Jojuan Salas-Rosario was named the Player of the Game for the Longtails for his big run scoring hit and stellar fielding, including a sliding catch in foul play off of 3B in front of the opponent's dugout.

Yes, you read that right.  The Bermuda bats exploded in their second game of the tournament on Saturday before the game was called due to lightning in the area in the third inning.  The Longtails were surely on their way to a mercy rule over the War Eagles with 24 hits and 15 walks in just three innings.  Johnny Bart struck out six over two innings of work and Connor Hupman pitched a perfect third striking out the sides.  There were hits galore with everyone contributing.  Jack Fischer and Zach McGuire each had four hits, with McGuire contributing 9 RBI and Fischer 5 RBI. Luke Driscoll added five RBI and Johnny Bart scored 5 runs, with Driscoll, McGuire, and Dylan Cooney each crossing the plate 4 times.

Play was suspended due to lightning and ultimately the tournament directors called off the remainder of the tournament due to the threat of bad weather.  Bermuda was likely to have gained a birth into the Championship Bracket, which would have given them the opportunity to advance as long as they continued winning on Sunday.

Even though the tournament was cancelled, the weather ended up being good enough to play on Sunday, and the Cherry Hill Nationals (who the Longtails played in the first tournament game) were kind enough to invite the Longtails to their field for a friendly game at their home field in New Jersey.  The Longtails threw five pitchers: Johnny Bart, Zach McGuire, Connor Hupman, Jojuan Salas-Rosario and Jack Fischer, with Hupman, Salas-Roasio and Fischer each recording a strikeout.  Luke Driscoll, Jojuan Salas-Rosario and Zach McGuire each continued their hot hitting with a base hit each.  Jackson Stier hauled down some long fly balls in the outfield and Zaki Gibbons-DeShields threw out a runner at second base from right field with Zach McGuire applying a smooth tag.  Ethan Adderley was strong behind the plate and reached base twice on walks.  Dylan Cooney also had a keen eye and walked twice.

The score was 2-2 after two innings, but ultimately the home team proved too strong for the Longtails with the Cherry Hill Nationals winning 20-4.  The Bermuda team was thrilled to play a game at a great facility and the home team was a great host.

The trip was an amazing experience for players, coaches and parents.

The 2018 U9 Bermuda Longtails Roster: